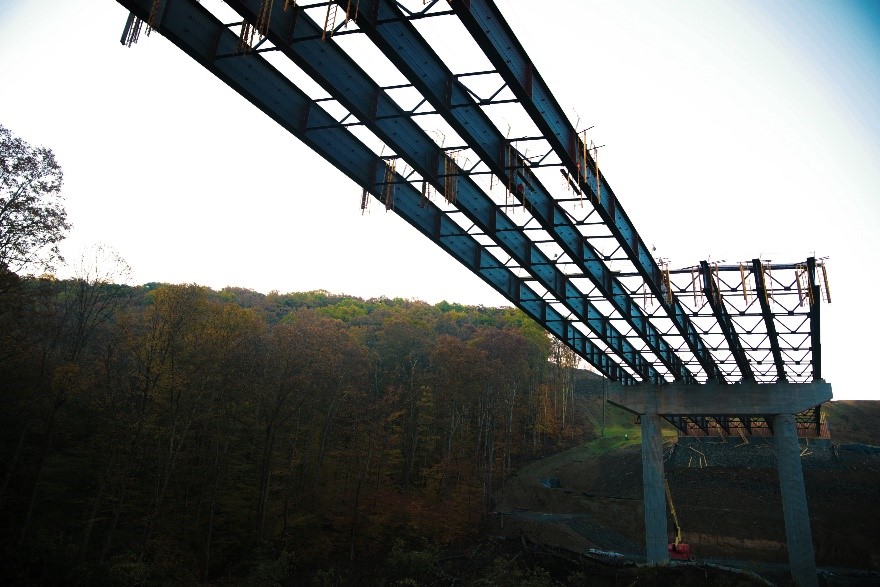 The Appalachian Regional Development Act of 1965 was enacted by Congress to oversee the economic development and construction of the Appalachian Development Highway System (ADHS). Due to West Virginia’s mountainous terrain, streams, and valleys, the ADHS made it a priority to develop a modern highway system to generate economic development in isolated areas. Corridor H is one of the 28 components of the proposed highway system. Made up of nine segments, Corridor H stretches 157 miles through the heart of the state. This $209M Design-Build Project extends Corridor H (US 48) from Kerens to the proposed US 219 Connector, between Montrose and Parsons on US 219. The overall project consists of 7.5 miles of new four-lane divided highway, at-grade intersections, 2.5 miles of side road access, forest trail head parking areas, and five sets of mainline structures. AB is working with prime contractor Kokosing to perform the complex erection of five bridges along the route. With sixty percent of the project being constructed within the Monongahela National Forest, the team is taking specific measures to minimize and mitigate effects of the highway on the National Forest.

AB’s in-house engineering developed erection means and methods for five, plate girder bridges of various configurations. These configurations include one, three span continuous, straight bridge; one, three span continuous skewed support bridge; two, three span continuous curved girder bridges; and one, five span continuous bridge structure. The bridge structures overall lengths range from approximately 600 feet to 1,000 feet. In the summer of 2018, AB began construction and has since completed the erection of bridges number one and two. Throughout erection, the engineering team performed analysis on permanent steel members for adequacy during all stages of construction, falsework and temporary works design (pier brackets and falsework tower design), crane adequacy and location, rigging component design and selection. Once completed, the bridges will carry four lanes of traffic, two in each direction.