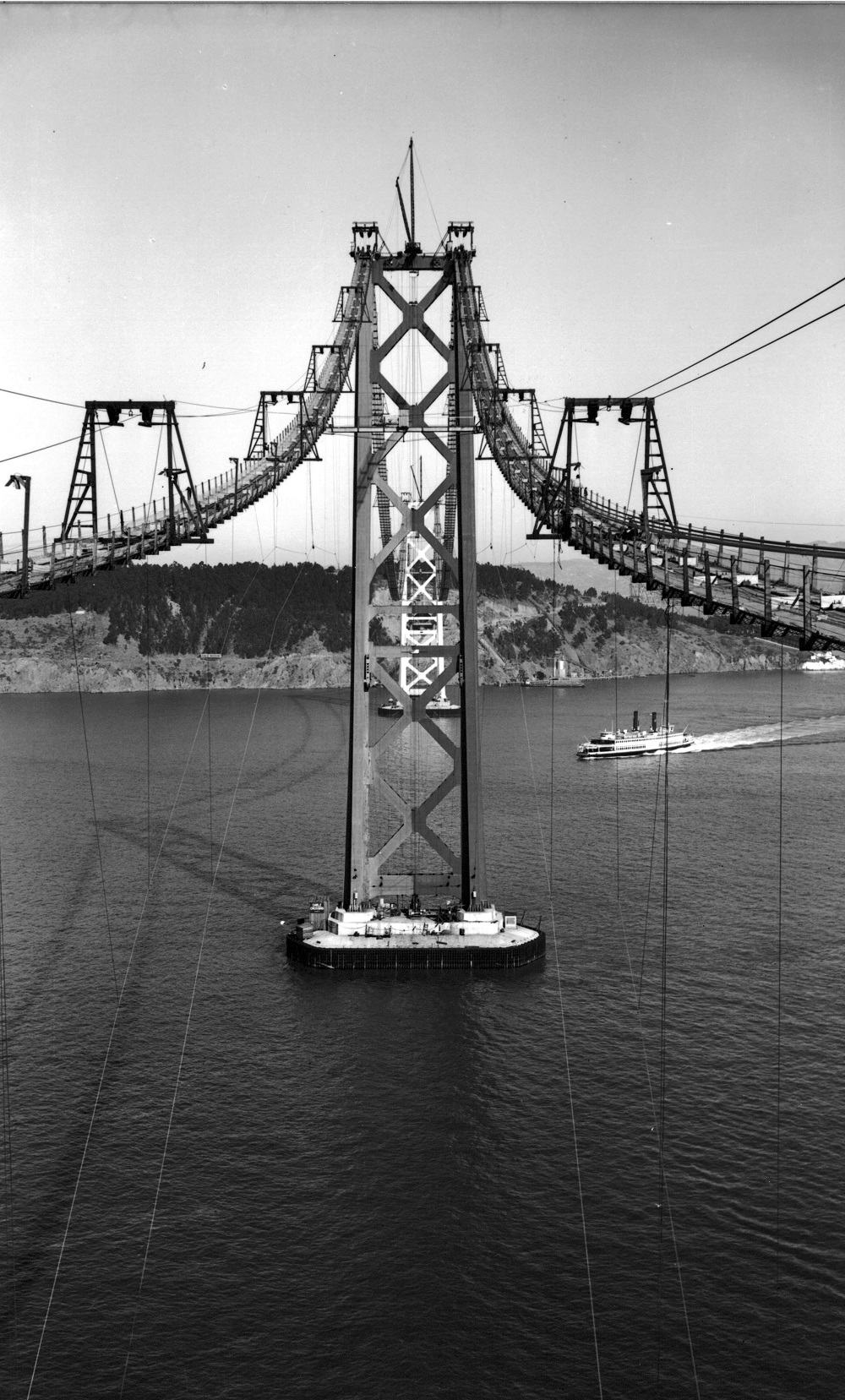 Since the gold rush days of California, the San Francisco-Oakland Bay area has seen a tremendous rise in population, and has steadily become a center for business, leisure, and travel. A burgeoning travel industry emerged across the San Francisco Bay – with the newly-constructed railroad touching down on the Oakland side. To avoid the losing San Francisco’s status as a major city, plans to span the Bay were devised, and ranged from a tunnel to a massive causeway. Eventually, it was decided that a network of bridges would be the most feasible solution.

American Bridge Company was awarded the prime superstructure contract for the 22,000 foot crossing of the San Francisco Bay in 1932. The work included two back-to-back suspension bridges, a major cantilevered truss, and numerous approach spans. American Bridge erected a total of 167,100 tons of structural steel for the project, including 19,100 tons of airspun main cables.

The two suspension bridges span the west portion of the Bay between San Francisco and Yerba Buena Island. These bridges have a suspended length of 9,271 feet and have four steel towers rising to a height of 515 feet. The cables were airspun in 37 strands of 472 wires each, pulled in two loops. There is a total of 21,465 feet of main cable, and 1,192 bridge rope suspenders.

The cantilevered truss and approaches span the east portion of the Bay, from Yerba Buena Island to Oakland. This section consists of a three-span cantilevered truss of 508 feet by 1400 feet by 512 feet, five-spans of 509 foot trusses, 14-spans of 288 foot trusses, plus a four-span curved truss at Yerba Buena Island. Both bridges are double deck from start to finish, enabling the transit of 12 lanes of traffic – six on the upper deck and six on the lower.

In 1989, San Francisco was struck with an earthquake causing the east span from the upper deck to collapse, one week before its scheduled retrofit. Since then, studies have been done to determine if the bridges in California were seismically safe for its commuters. As a result, the east span of the bridge needed to be completely replaced. In 2006, the American Bridge/Fluor Joint Venture constructed the new East Span (link to SAS on featured projects). The 1,263-foot replacement became the longest, single-towered, self-anchored suspension bridge in the world.