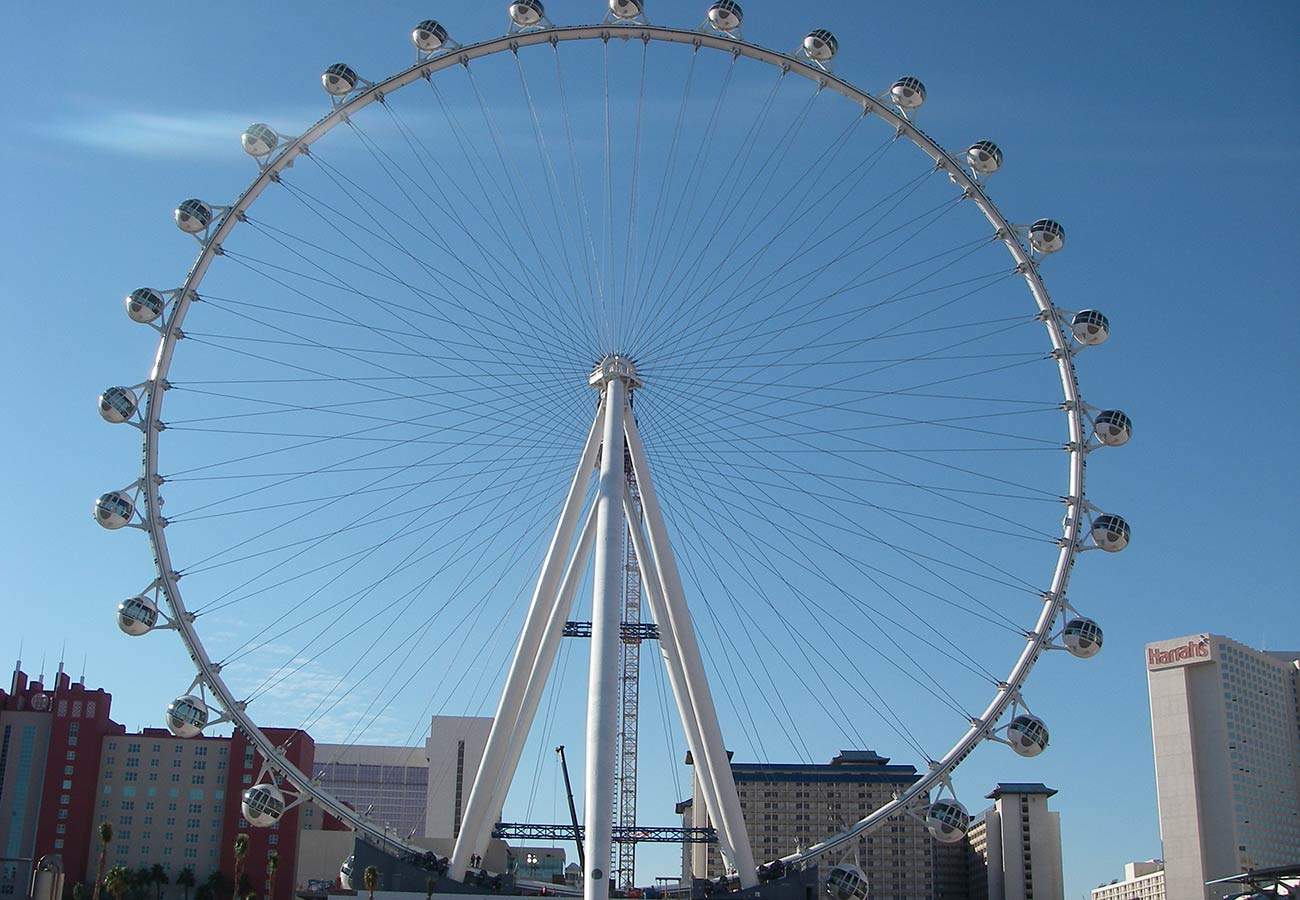 The Las Vegas High Roller (LVHR) is located on the Las Vegas Strip, across the street from Caesars Palace. Developed by Caesars Entertainment, this project was a signature component of The LINQ, a new $550M open-air retail, dining, and entertainment district. American Bridge was the general contractor for the world record-breaking 550 foot wheel. 28 observation cars enable up to 40 passengers in each car to get a panoramic view of the entire Las Vegas Valley.

The LVHR structure consists of a rim, a rotating hub and fixed spindle, four support legs, and one braced leg. The rim is 469 feet in diameter and assembled from 28 segments that are bolted together. The rim is connected to the hub by 112 cable spokes made from 75mm diameter locked coil cables. The tension in these cables forces the rim to maintain its shape and keep the entire circular steel structure in compression as the rim and hub rotate around a fixed spindle on two main wheel bearings. The spindle sits 285 feet above the ground and it is mounted at each end to a pair of support legs. The east end of the spindle is also supported by a braced leg which stiffens the structure in the transverse direction. This unique project required a massive amount of construction engineering and procedure development. By project completion, over 300 drawing sheets were prepared by American Bridge’s in-house engineering department.

Support Leg Construction
American Bridge and ironworkers from Local 433, Las Vegas, Nevada made short work of erecting the support legs and associated temporary iron. The first four support leg picks were made up on the ground into three piece units weighing 96 tons each including rigging. The built-up units were picked and precisely stabbed through the previously erected wheel platform structure, and landed on the anchor bolts and shear keys. Temporary trusses were erected between the legs at several elevations.

The second elevation support leg pick was 106 tons and the third was 55 tons. This work culminated with two pieces at 43 tons. The leg segments were bolted together with 1.5 inch diameter A325 bolts. This bolted connection was made with an internal bolting flange that is similar to the typical windmill tower detail. The 43-ton pieces each tied a pair of support legs together.

Panoramic View
The Las Vegas High Roller tops out at 550 feet, making it the largest observation wheel in the world. Moving at approximately one foot per second, a complete revolution takes about 30 minutes. The LVHR’s spherical cabins each weigh approximately 44,000 pounds and contain 300 square feet of glass. Fabrication of the wheel began in late 2011 and took place in several locations across the globe including China, Japan, France, Sweden, Italy, Netherlands, Germany, Colorado and Las Vegas.