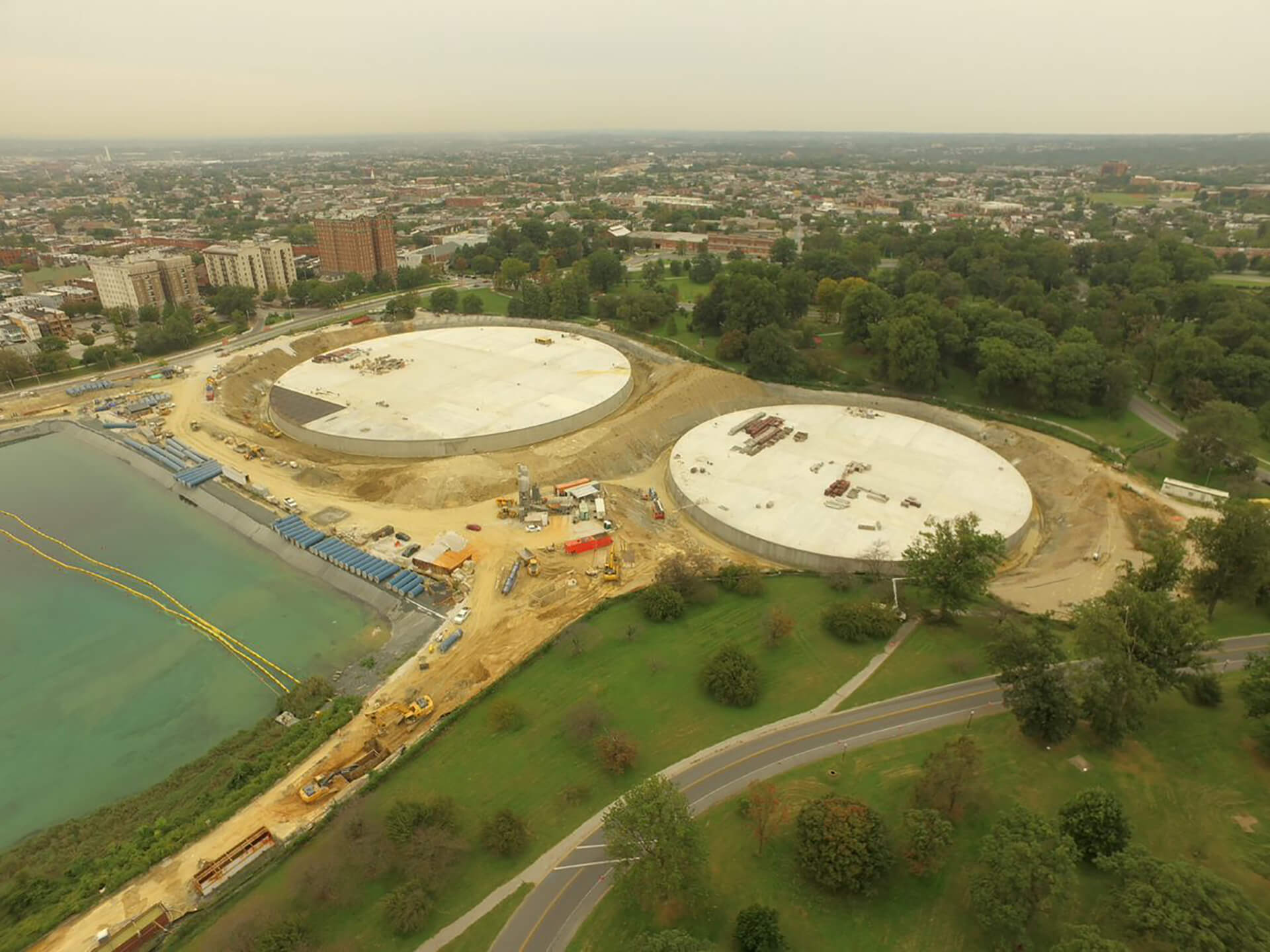 For the citizens of Baltimore, the Druid Hill Reservoir has been a significant source of the city’s drinking water since 1871. Having an abundance of natural springs and deep ravines, Druid Park seemed to be the perfect site for a new reservoir.

Due to new Environmental Protection Agency (EPA) rules put into place in 2006 requiring municipalities to cover large open reservoirs used for drinking water, the City of Baltimore needed to find a solution to comply with the new EPA rules, while keeping the natural, historic landscape beloved by the local community. After years of studies and community engagement, the city opted to construct two tanks under the lake at the park.

In April of 2017, the city selected Oscar Renda Contracting (ORC) to take on this unique project. ORC worked closely with the city to provide creative, one-of-kind solutions on various aspects of the project, which saved time and provided the safest environment for the 54-million-gallon water supply.
The first challenge of the project was dividing the lake into two sections – one that would remain filled with drinking water and the other that would be emptied to make space for the tanks. Draining part of the lake, instead of excavating new holes, significantly reduced the amount of time the project would take and preserved the natural beauty of the surrounding park.

To ensure the safety of the water supply, ORC value engineered and constructed a one-of-a-kind temporary dam utilizing over 90,000 tons of rip rap stone with a geo synthetic liner. Laying the stone into the lake carefully over five months – testing the water for quality multiple times daily – proved to be a challenging task but worthwhile for the overall success of the project.
“The coffer dam was a major feature of the project that was designed towards a steel sheeted structure, however taking into the account the existing bedrock, shallow overburden, and the fact that the existing dam was one of the oldest and tallest earthen dams in the country, we determined that a rip rap stone and liner dam would be the most efficient and safest method for this application,” said Project Manager John Marcantoni.

Upon completion of the temporary dam, ORC dewatered and excavated the construction section to make way for the tanks construction.
ORC began construction of the two cast in place, pre-stressed concrete water storage tanks in January of 2019. Tank one is 500 feet in diameter and tank two is 450 feet in diameter. Both tanks are 20 feet tall and will hold 52 million gallons of water combined. Tank construction is scheduled to be completed by January of 2021. Once the tank construction phase is complete, ORC will spend another year working on additional aspects of the project including associated pipeline installation and a lake aeration system. The completed project will provide a decreased lake size, as well as an additional 14 acres of green space in Druid Hill Park.

“This is the first construction project ever constructed within a live drinking water reservoir,” said ORC Principal Rudy Renda. “The original design called for a steel sheet piling coffer dam to separate our work area from the drinking reservoir. We knew that there was a more effective option than using the steel sheeting and we proposed a natural rock coffer dam in lieu of the sheeting, saving almost eight months on the project schedule.”

ORC’s construction program also includes constructing an upgraded lighting package, a wider promenade, a new path for cyclists and an amphitheater. The remainder of the 146-year-old reservoir will be available for recreational activities such as fishing and kayaking.

The completion of this project will open the next chapter for this historic park, providing the safety of the city’s drinking water supply while adding landscape to enhance the parks elegance and significance to community.
*Source asce.org