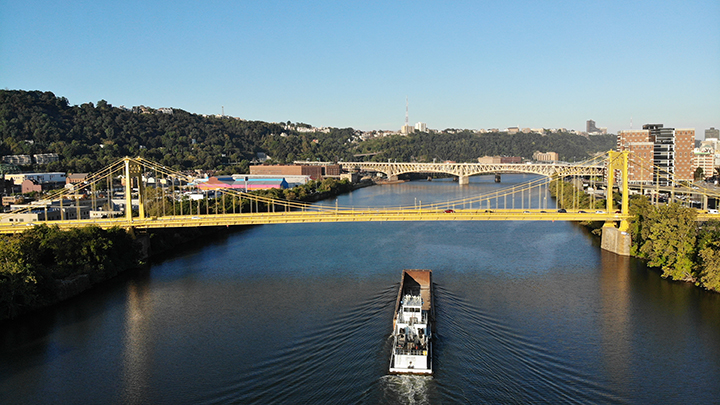 In 2017, American Bridge was awarded the contract for the rehabilitation and dehumidification of the South 10th Bridge. The 1,275-foot suspension bridge crosses the Monongahela River in downtown Pittsburgh. Dehumidification, a relatively new technology in North America, involves blowing dry air through the main cables to reduce the relative humidity, inhibiting the development of corrosion.

The project team broke the work into two phases, the east side and west side of the bridge. Varying lane closures of the bridge and surrounding streets were required to complete the structural and cable rehabilitation. The bridge remained open to traffic as it is a major connection between downtown Pittsburgh and South Side. Because it is in a congested area, safety has been a top priority throughout the project. American Bridge coordinates maintenance and protection of traffic efforts with the County and City of Pittsburgh authorities to avoid impacts during heavy traffic times.

Training was held to demonstrate the different tasks required on dehumidification works. Ironworkers were successfully trained how to warp and seal cables, and install wedges and injection/exhaust sleeves. A new technique for this Ironworker crew was cable wire splicing. Each cable on 10th Street is made up of more than 4,000 wires about four millimeters in diameter. When these cable wires rust or break, they need to be repaired. AB was tasked with splicing and tensioning wires along the main cable, specifically within the splay chamber of the South Anchorage. Specially-fabricated wire ferrules were used to splice new wire to the existing damaged wires. Turnbuckles tensioned the wires to roughly 5 kips and secured with a specialized hydraulic press.